The COP25 that will be held in Santiago on December 2019 is getting closer and hopefully, the connection between the need for allocating funds to developing countries and mechanisms that encourage investments will be emphasized this year. The discourse surrounding climate change has for a long time been scattered and not very focused. In fact, the focus has been placed on everything except on what has actually been the problem, fingers have been pointed at the growing populations in the developing world, in the growing economies and emerging middle class in those societies.

However, that perspective on what is driving us away from the Paris Agreement is not only unprecise, it also shifts the blame away from other responsible parties. Sub-Saharan Africa has some of the countries already suffering the worst blows of the changing climate (see the map down below). But also some of the countries doing the most, relatively to their possibilities, in regard to the Paris Agreement. African nations such as Gambia and Morocco are leading in meeting the goals of the Paris Agreement, which is of course good, but the accountability and responsibility should be higher on the agendas of the developed nation.

Impact of Climate Change and Vulnerability: 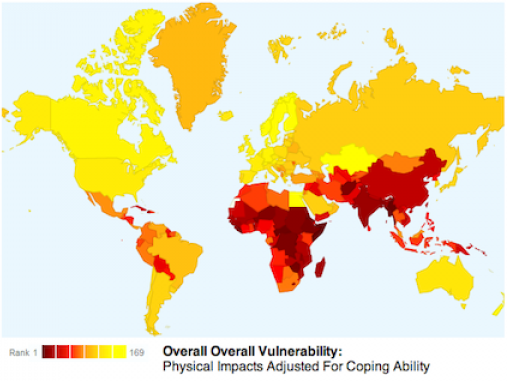 The 2015 Paris Agreement is supposed to make the transition towards a sustainable society easier for developing countries. One of the ways the Agreement tries to do that is through the Green Climate Fund, where the developed countries pledge money to help the developing countries in their transition to more sustainable societies. But the developing countries also have to raise investments from the outside, and that has not been going as planned: mechanisms as the Clean Development Mechanism (CDM) did not really work out so well in countries with low emissions since there was no motivating factor for the investors, who were looking for large projects in order to generate a larger amount of carbon credits. That system is encouraging countries to emit more greenhouse gases instead of working towards reducing harmful emissions. Is it actually ethical to always have our eyes set on possible financial gains, especially in this sort of topic where whether or not we reach the goal of the Paris Agreement is determinant to the future of our planet? The issue of different priorities and interests also becomes very clear in regard to the distribution of different green funds and environmental aid. The developed nations often tend to favor and direct the aid and money towards projects meant to improve the global commons rather than to direct the aid towards projects meant to improve the local so-called “brown issues“.

After the COP24 in Katowice, Poland, a lot was left feeling like there was not enough being done.The demonstrations for the protection of the environment have intensified since then, and there has been a greater focus on the climate justice aspect. Who is responsible for the biggest emissions and who gets to pay for its consequences? It boils down to the insufficient efforts of the developed world and how regions such as Africa are incorporating good climate policies, but without the economic support of the richer countries, those efforts are often in vain. The developed polluter countries should pay more, and they should be paying to make sure that climate justice can become a reality in the most vulnerable areas.