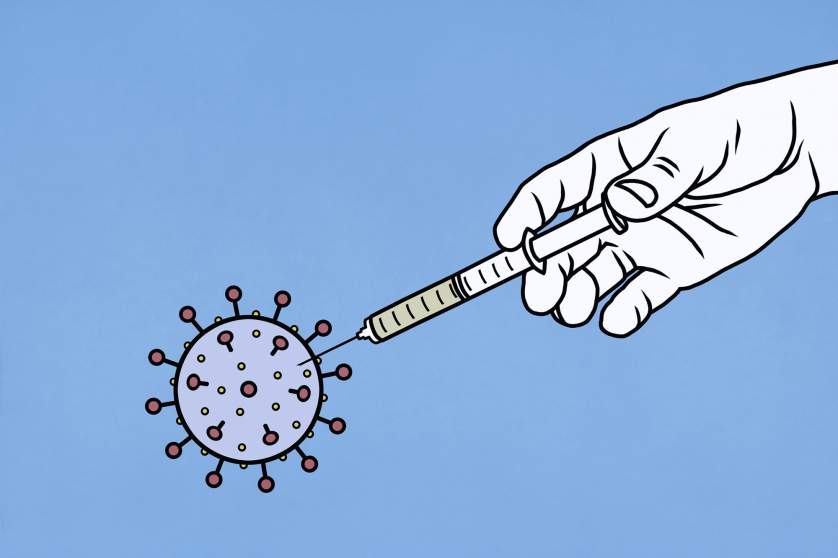 “I don’t think it can stand alone, because we need to increase capacity.

Since the vaccine’s strategy put in place by the European Union is struggling, some Member States have decided not to remain aligned with the communitarian approach.
For instance, Austria and Denmark, tired of the delays over the EU vaccination campaign, have decided to cooperate with Israel in the production of vaccines of the second generation to tackle mutations of the coronavirus.
Nevertheless, these two countries followed the path already opened up by some other Member States, such as Hungary, Slovakia, Czech Republic, which bought vaccines not yet approved by the EMA. Thus, Austria and Denmark have become just the “peak” of the iceberg of the break away from Brussels’ strategy. 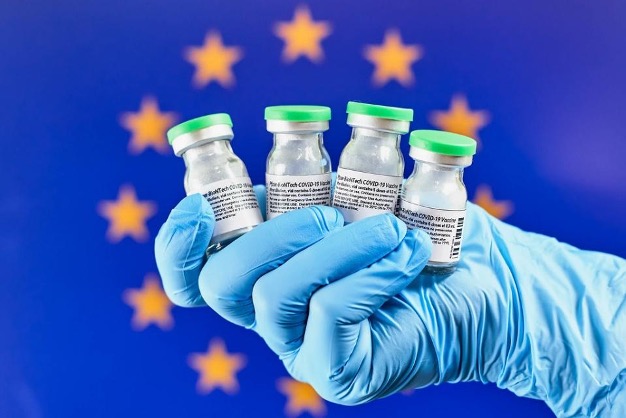 EU vs the Member States: who is right?

The misalignment between the Member States and the Commission occurs when fierce criticisms are moved against Brussels’ strategy in the rollout of the vaccines by different countries in different areas. However, it is premature to speak about the EU’s vaccine strategy failure. Plus, there is the need for a better and deeper analysis.
However, one cannot deny that mistakes have been made in the purchase of the vaccines. Even Ursula Von Der Leyen, the President of the Commission, admitted it. Yet she also said that the governments share part of the fault since they were consulted during the negotiation. At this point, it is easy to understand why the bureaucracy prevailed in the approach to vaccine contracts: just try to imagine what would have happened if the Commission would have negotiated without consulting all the Member States. 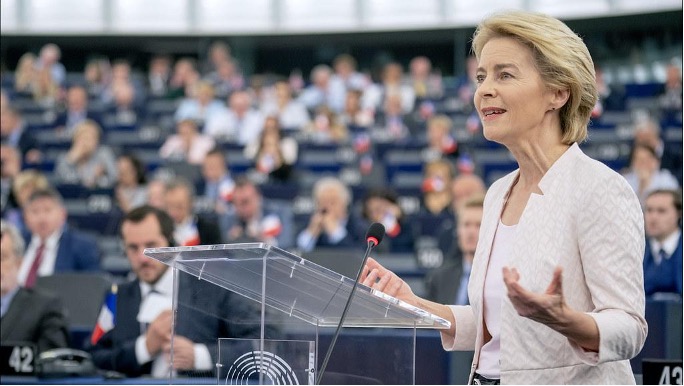 Delays in the negotiations

One of the main critics moved against the EU’s strategy regards the late purchase of the vaccines. The main reason behind the delay was that the Commission had to consider the different requests from all the 27 Member States. The EU could not afford hazards in the negotiations with the pharmaceutical companies.
For instance, because of the requests of some Member States, the Commission tried to contain the prices of the vaccines. Instead, other countries whose strategies have been defined as successful, such as the USA, UK, and Israel, have decided to proceed more boldly.
This was surely one of the biggest mistakes in the strategy. Moreover, trying to reduce the costs is not an advantage because the loss of revenue resulting from the failure to reopen economic activities has already minimized any savings obtained with the lower prices of vaccines. Anyway, the goal of the strategy was to make “solidarity” prevailing, since smaller European states could have not afforded high prices. The small states are the ones that praise the common strategy, without which it would have been impossible for them to vaccinate at the same rate as Germany or France.

The issue of AstraZeneca

Criticisms have also been moved against the decision made by the Commission to bet on the so-called “wrong horse“- the AstraZeneca vaccine -, which has shown problems in the delivery of the vaccines.
But it is important to remind that when the negotiations started, it was impossible to know which one was the “right horse”. While other countries have bet more on mRNA vaccines – risking more because it would have been the first attempt of mass vaccination with this type of vaccine -, the European Union decided to adopt a more cautious approach, relying, mainly but not only, on the Adenovirus vaccine developed by the Anglo-Swedish company. It is understandable if we consider that that vaccine was the cheaper option – even in terms of delivery – and that it is developed in the European Union. Moreover, relying too much on the Pfizer vaccine was arduous because some Member States thought that negotiations were pushed by Germany, which wanted to guarantee to the German business BioNTech (Pfizer vaccine producer) to make money.
Anyway, also other vaccines have been authorized, since, from the beginning, the Commission has tried to have a form of protection without binding just to one vaccine.

Sebastian Kurz, Chancellor of Austria, moved a big criticism not against the common strategy, but against the EMA, which, according to him “was too slow in approving the vaccines“.
EMA explained that the long-lasting assessment of the vaccines was made on purpose to calm down the skeptical public opinion, which, in the beginning, did not trust vaccines for the fact that they were realized in a relatively short time. Making a comparison with the other countries that were faster in approving the vaccines – primarily the UK, USA, and Israel – it is possible to assume that their vaccinal campaign was riskier. They proceeded in a faster way to vaccinate the population immediately. Today, it is clear that their approach was the winning one.

What was the role of Brexit?
Focusing on the UK, one cannot demonstrate that the quick rollout of the vaccines was because of Brexit. Indeed, even if the approval would have been possible also under EU law, it is clear that UK aimed to show that “without EU is better“. Maybe this was the purpose that pushed the Country to a faster distribution of the doses.

The slow distribution of the Member States

Therefore, is the vaccinal campaign a great failure of the EU? It is possible. However, it is important to keep in mind the great success of the solidarity, which has permitted the Member States to proceed all together at the same speed. For what concerns the national governments that blame the Commission, they should look back at what they have been doing at home since most of the vaccines already delivered have not yet been distributed – only 51 million doses out of the 69.5 million delivered in the EU have been used.
Quoting Commissioner Thierry Breton “it is important to remain aligned with the strategy“. 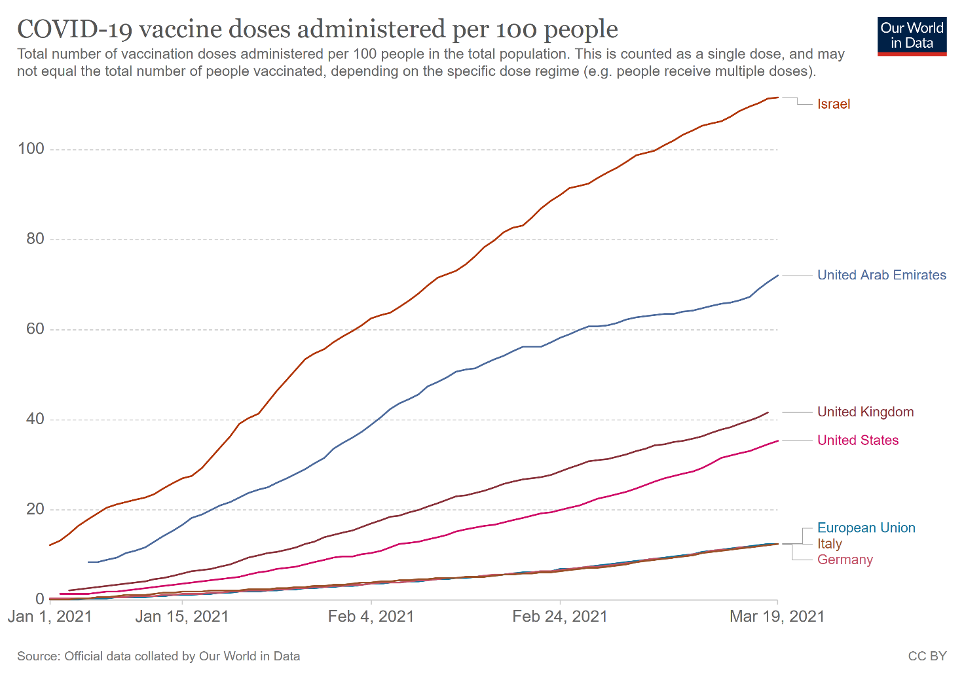 On the 30th of January, Brussels approved a new regulation to monitor the shipment of the vaccines out of the European borders. Due to this regulation the new Italian Prime Minister, Mario Draghi, decided to block a batch of vaccines headed to Australia. At the moment, it is the first Member State that has taken this decision. It cannot be excluded that other countries could follow Draghi’s path to show a hard-line over the pharmaceutical companies exporting vaccines to other countries out of the EU. This decision can be seen as a turning point: not only because the European Union was accused of delays in the delivery of AstraZeneca, but also because the Anglo-Swedish company was suspected of having hijacked a lot of doses intended to European Union.
The hard-line measure of the European Union seems to be in line with the decisions taken by the other countries, such as the United States and Great Britain.
Thus, the decision taken by Italy could be helpful for the European bloc. After the European Union’s regulation, also the other Member States could decide to block the shipment of the vaccines to third countries. Mario Draghi also accused Brussels of not monitoring adequately the export of vaccines as the United States is doing.
Thus, while the action of Draghi seems to be on the same route as Brussels, his attack, in such a moment, results not coherent to have a major cohesion between the Member States. It could act as a deterrent to the capacity of the European Union to act in hard and difficult situations like the one that is experiencing.

In this situation, as occurred in other difficult moments, the Member States attempted to let their own business prevail over the common European strategy.
Since the vaccination plan needs real participation and coherence of all the Member States, their lack of interest in interacting is counterproductive. Especially because they have decided to adopt a common strategy. This was the case of Austria, Denmark, and some other countries that have diverged from the common vaccination plan and requested help from China, Russia, and Israel.
However, besides these defections, the fact that the Member States have decided to leave the Commission the capacity to negotiate on their behalf is a strong example of integration at the European level. This could be seen as a big step forward in the European integration process because the European Union acted as one actor.
Looking back at the debunking of the criticisms, it is crystal clear that almost all the problems occurred because the Member States wanted to have a say in the negotiations. These problems could be solved only through a deeper integration Hence, provocatively, we ask the European countries: What are you waiting for to give more competencies to the EU?