To secure ourselves against defeat lies in our own hands, but the opportunity of defeating the enemy is provided by the enemy himself. (Sun Tzu, Chapter 4)

The famous “The Art of War” needs no presentation, it has been influencing for centuries, but can we say that the thousands of years old Confucian wisdom is still present in the nowadays Communist China’s strategy? Can we think that the new, ever-growing influence China is having on different countries is its way of “defeating” the hegemonic position the US has had for decades, and that the US is giving it this opportunity by imposing the “one-size fits all” approach of the Washington Consensus? “China is the greatest asymmetric superpower the world has ever seen, a nation that relies less on traditional tools of power projection than any in history and leads instead by the electric power of its example and the bluff impact of size.” (Ramo, 2004) But what is even more relevant is that China’s new ideas are having a gigantic effect outside of the Chinese borders. As Ramo states: “China is marking a path for other nations around the world who are trying to figure out not simply how to develop their countries, but also how to fit into the international order in a way that allows them to be truly independent, to protect their way of life and political choices in a world with a single massively powerful centre of gravity”. This new physics of power and development was defined in 2004 by Joshua Cooper Ramo, a policy analyst based in Britain, the Beijing Consensus, and it is often seen as in opposition to the Washington Consensus. The Beijing Consensus is increasingly viewed by developing countries as an attractive alternative to western development strategies based on free market and democracy (WFF, 2011)

What is important to note here is that there is no agreement on its existence, content or utility. Nonetheless, the term is extensively used among policy makers and in the media, contributing to the widespread perception that “the Beijing Consensus is changing the international order” (WFF, 2011) 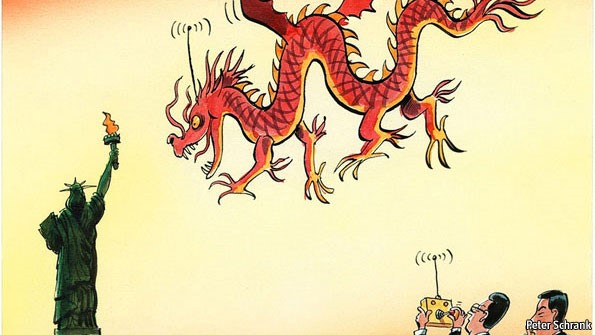 The idea of the Beijing Consensus is based on three macro ideas that I will briefly present here. First of all, it refers to China’s strategy on using innovation as a driver for development. Secondly, China is improving its economy not to merely increase the national GDP. Instead, it aims to an improvement of the quality of life. The last point regards the auto-determination and the need for a continuous independence from outside influence, in opposition to the Washington Consensus legacy – a liberation of the developing countries from the US (World Foresight Forum, 2011).

China’s strength is that it is gaining power thanks to the example it gives, and not because of weaponry and military force. The greater Chinese aim is to “build a global network of friendly nations that will not challenge the West militarily or economically, but conceptually and politically.” (The Telegraph, 2010) We should also keep in mind that the Chinese not only complete major projects on time and on budget but are perfectly happy to be a “sugar daddy for human rights abusers”, how they are depicted in Halper’s (an official in various Republican administrations) typically succinct phrase. Caring little about good governance, they don’t lecture their partners (The Telegraph, 2010) At the same time is a matter of time. Getting funds from the Chinese is far more easy and faster than from the Western institutions as the World Bank. As Senegal’s president Wage stated in 2007: “Western institutions and investors were often “slow… patronising and post-colonial” in their dealings with Africans”. An infrastructure contract that would take five years to negotiate with the World Bank would take three months with the Chinese (The Telegraph, 2010)

As I said before, there is an ongoing debate among scholars and policy-makers on whether the term Beijing Consensus exists and if it is appropriate to use it. Even the Chinese leaders avoid using the term “Chinese model” and instead prefer to say the “Chinese case”. Maybe because they are strongly aware of the US’s sensitivity to any idea suggesting the emergence of a rival power and ideology—and “conflict with America could wreck China’s economic growth” (The Economist, 2010). Mr. Halper, argues that “just as globalisation is shrinking the world, China is shrinking the West by quietly limiting the projection of its values” (The Economist, 2010). In the end, the political bargain kept by China’s ever-expanding list of international allies is to support its policy on Taiwan and Tibet and ignore outcries over human rights. These are small prices to pay for gaining new power stations (The Telegraph, 2010). Beijing does not want a confrontation with Washington and Brussels but a “path around the West” to create a new international bloc. The Chinese Communist Party has shown “marginal, rogue and autocratic states” that “state-directed capitalism” can work (The Telegraph, 2010).

Intuitively enough, there are some questions that emerge in our mind. Is the Beijing approach counter-balancing the Washington one? Are there any chances that the PRC can take over the US in terms of influence? How does it really influence the developing countries, specifically the African ones? And at the end of the day, can the Chinese approach really have a positive impact on the African countries’ people, as the second point of the Beijing Consensus concept affirms?

While the mainstream discourse is criticizing the dominant Western states’ approach, modern China’s expansion into Africa over the course of the last two decades – its burgeoning economic and political ties – has led to similar accusations of a “fresh neo-colonialism disguised as South-South development” (Servant, 2005). There is a difference though: whereas Western partnership is often based on the misperception of Africa as a continent irrevocably poor and allergic to development, the Chinese benchmark looks on an Africa which, though “facing challenges,” is nevertheless bestowed with “unprecedented opportunities for development”  (ISS Report 2012).

There are Chinese scholars that are strongly criticizing their government’s implication with the developing countries. Even if the African countries are happy with the Chinese investments, some officials are still showing signs of concern and caution.

Indeed, in 2006 even the largely supportive South African President Thabo Mbeki made the point of welcoming closer Sino-African relations whilst nonetheless bearing in mind that a partnership based mainly on the exportation of raw materials and importation of manufactured goods risked only replicating a “colonial relationship” that would see Africa “condemned to underdevelopment” (BBC News, 2006).

Spilius A., 2010, The Beijing Consensus: How China’s Authoritarian Model Will Dominate the 21st Century by Stefan Halper,
http://www.telegraph.co.uk/culture/books/bookreviews/7719628/The-Beijing-Consensus-How-Chinas-Authoritarian-Model-Will-Dominate-the-21st-Century-by-Stefan-Halper.html, November 10th, 2017,

Sun Tzu, The art of war,