A post-functionalist approach to the rise of Italian populism and its consequences on European integration.

With the result of the national political election held the 4th of March 2018, Italy, one of the founding members of the European Union, saw its first ever populist, anti-establishment and anti-European integration government.After months of negotiations, the novice populists of the 5 Stars Movement (5SM) and the far-right of Matteo Salvini’s League formed a grand coalition to hold the Italian Parliamentary majority, appointing as PM the neutral law professor Giuseppe Conte.While it is just probable that some interests have been lifted amid the negotiations, the anti-EU political line of both sides is, instead, the connection marker of the new government’s approach.A vivid example is the inside crisis sparked – during the negotiations – by the President of the Republic’s veto on the nominee of Paolo Savona as Finance Minister, because of his well know euro-scepticism and some old publications in which he theorized an Italian exit strategy – out of the EU.Beside the political bargaining that led to the populists’ coalition, an in depth analysis focuses on how the rise of an anti-establishment government have been consequent to the crisis of mainstream, pro-EU political actors into a state that have always been keen to European integration project.
The scope of the paper is to identify the origin and the source of the Italian politics crisis then considering possible impacts on the process of European integration.

We consider the Italian case as a crisis – although in its embryonic stage – since the actual government approach to European politics is likely to determine a decision-making situation of perceived disintegration or reduction of the actual level of integration (Schimmelfennig, 2017) because both of its bargaining power in the Council and its relevance on the economic ground.
For example, the overcome of fiscal discipline, by breaching off the SGP parameters (3% of deficit-to-GDP ratio overall), is an issue into Italian agenda.

Also, we actually consider the League as a non-mainstream political actor in Italy since its changes in governance structure, from the Umberto Bossi secretariat to Salvini’s leadership, have renewed the structure of the party and radically changed both its political agenda and the policy aims.

The model used for this analysis is the one developed by Hanspeter Kriesi (2015) on the condition for the rise of populism.

According to this analytic model, the populist movements risen recently in Italy have found the perfect socio-political environment to adopt their strategy because of a widespread crisis of representation, that has occurred to the so called mainstream politics – notably, pro-integration parties like the centre-left Partito Democratico and the centre-right Forza Italia overall.

As data in Table 1 shows, since 2009 the above-cited parties have experienced a respective plummet in consensus among Italian voters. 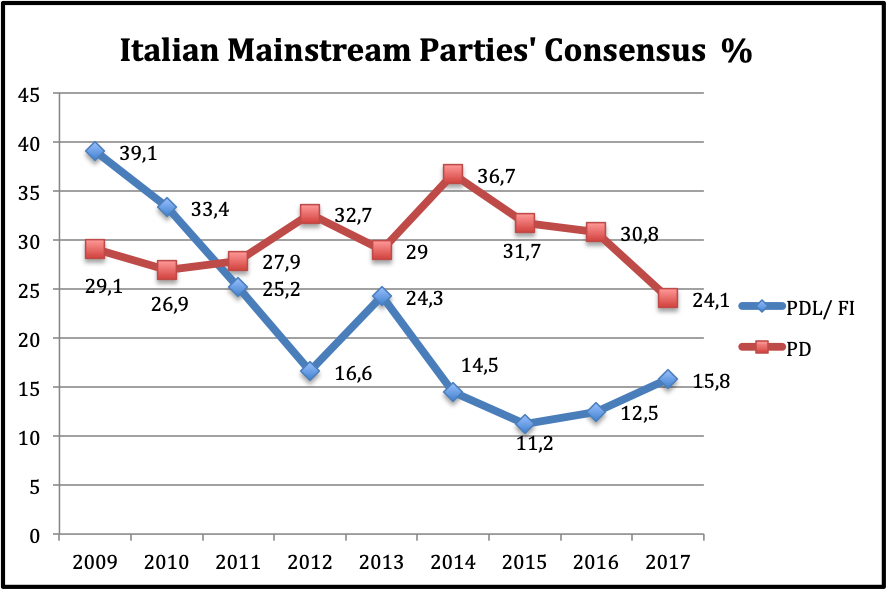 The common line between the consensus dwindle for both FI (formerly Popolo delle Libertà- PDL) and PD is represented by the years of government in charge, as intended 2009-2011 for Berlusconi’s parties and 2013-2017 for PD.

This crisis of representation can be explained with the constant tension between responsibility and responsiveness for mainstream parties, so between the party’s role of representation and its role of guarantor of wide national and supranational interests (H. Kriesi, 2015).

This is particularly true for Partito Democratico, which under the premiership of Matteo Renzi first, and Paolo Gentiloni after, have pushed for strong structural reforms whose sunk costs have shown tremendous in terms of loss of votes.

Note how the major centre-left party in Italy reached a peak in consensus during the years of European elections (2014) with a 36.7% of Italians who trusted PM Matteo Renzi’s leadership, also ahead of the strong results in EU elections (40.7%).

But from that year on, the trend became negative until the bottom-low of 18.76 % of the last political elections in March 2018.

As a matter of fact, from 2014 on the Partito Democratico, with the heritage of a monstrous debt-to-GDP ratio of 133.8%, found its governments constrained between the political effort to keep and enlarge its electorate and the economic need of levelling the public debt, in order to comply with the European fiscal rules and remain on track with the integration process.

This translated into a series of ambivalent policies, especially under the Premiership of Matteo Renzi, like for example the Decree-Law 66/2014, a “80€ bonus” policy of a fiscal leverage to eligible low income households and the Constitutional Referendum held in December 2016, whose negative outcome – 59.12% of votes for NO – determined PM resignation.

The 2016 Referendum particularly showed how a strong commitment to European administrative convergence – which translated into a) abolition of perfect bicameralism in the Parliament and b) costs-cutting of institutions, into the Referendum question – was not a primary aim for the Italian electorate.

2. The role of the media

It is no surprise that the new wave of anti-EU politics arise in recent elections have taken benefits from the re-adaptation of the role of the public media, generally at the expense of mainstream parties.

Kriesi talks about the new “media logic” of interpreting, selecting and adapting news to their interests, from which particularly centralised and personified parties – like the “Salvini-centred” League – can take advance.

In the same way, the 5SM adapted to the media logic by switching from a pluralised approach of political communication, to a centralisation on the figure of its PM-candidate, the actual deputy PM Luigi Di Maio. 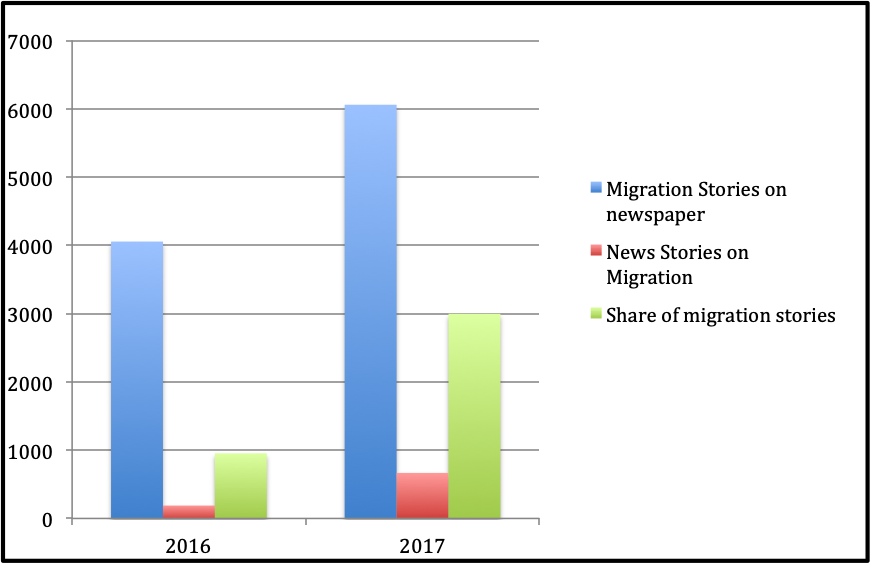 We picked the immigration issue, which has been one of the main arguments of split between the actual government coalition and the EU, to analyse some data.

The League especially – but not less than the 5SM – have based its campaign during the last national election on a promised shift towards a harder approach to illegal migration, making it the strongest socio-political point of the populists’ electoral programme among their voters.

A migrants unfriendly and bi-lateral oriented agenda on such a critical issue has revealed as a breakup point between the new born populist coalition-government and the European Commission, as well as some of the other Member States – as the recent cases of Aquarius[1] and Diciotti[2] ships have shown.

That given, amid the uncertainty of the political environment in Italy before the recent elections, the media coverage on migration adapted and rapidly increased (see Table 2), assisting the massive and continuous campaign that 5SM and the League made on it, through the dramatization and scandal-shifting tone of the news.

Mainstream parties – like the Partito Democratico and the other centre-left parties overall – which have a more friendly and welcoming position on immigration, have been cut out by the media coverage.

For instance, news on safe and/or legal channels of migration in Italy remained marginal; humanitarian corridors have been cited in only 94 articles during 2017, as well as relocation stories, that have been the main points of only 86 articles (ANSA).

This first analysis leads us to one conclusion: the main source of crisis for the mainstream politics is domestic to Italy.

If there’s almost no doubt that the financial crisis, which occurred from 2008 and shocked most of the economies in the EU – including a highly indebted Italy – have been a major issue in the decline of governing parties, it is as well true that the incapacity of mainstream actors to collide both European and domestic interests – in a tensed context of media pressure – is the internal, determinant factor for their actual crisis.

The major impact of this crisis on the whole dynamics of European integration is expected to be seen into the next European Parliament elections of May 2019.

The last two elections held at the European level (2009 and 2014) saw the two Italian mainstream parties performing excellently, if not even over-performing in the case of 2014 Partito Democratico.

In 2009, the second year of Berlusconi’s fourth government, PDL and PD elected, respectively, 29 MEPs with the European People Party (EPP) and 21 MEPs with the Socialists and Democrats (S&D), on a total of 72 elected Italian European Parliament Members.

EPP and S&D resulted as the two main groups in the EP.

In 2014 elections, with the appointment of unelected PM Matteo Renzi, after the resignation of Enrico Letta, PD performed even better in EP elections acquiring 31 MEPs (+10 with respect to 2009), while Berlusconi’s Forza Italia – already in decline after the turmoil and quasi default of 2011 – looses 16 MEPs, placing a total of only 13 Members in Strasbourg.

Thus, we can assess the Italian governing parties’ results in European elections are in net contrast with the hypotheses of Reif and Schmitt (the “Second-order elections” model, 1980) that government parties perform worst at European level when EP elections take place in the middle of their electoral cycle[3].

This trend is the expected outcome also for the next round of European elections in May 2019.

If some of the most known euro-sceptic parties, like Orban’s Fidesz for example, are differently positioned into the European parties’ political spectre (Orban still formally stands with the EPP), all the actors that are not tied to the main streams of EP politics, like the League and the 5SM, are likely to confirm the positive results obtained at the national level.

This is mainly because populists themselves have drawn the campaign agenda for European elections: contrasting the idea of a deepest political, economic integrated EU in favour of architecture of more sovereign and autonomous Member States.

A stronger, cohesive coalition of parties in the Europe of Freedom and Direct Democracy (EFDD) where 5SM stands, and Europe of Nations and Freedom (ENF) where League stands, seriously runs to undermine the project of a deepen liberal integration of the European Union. 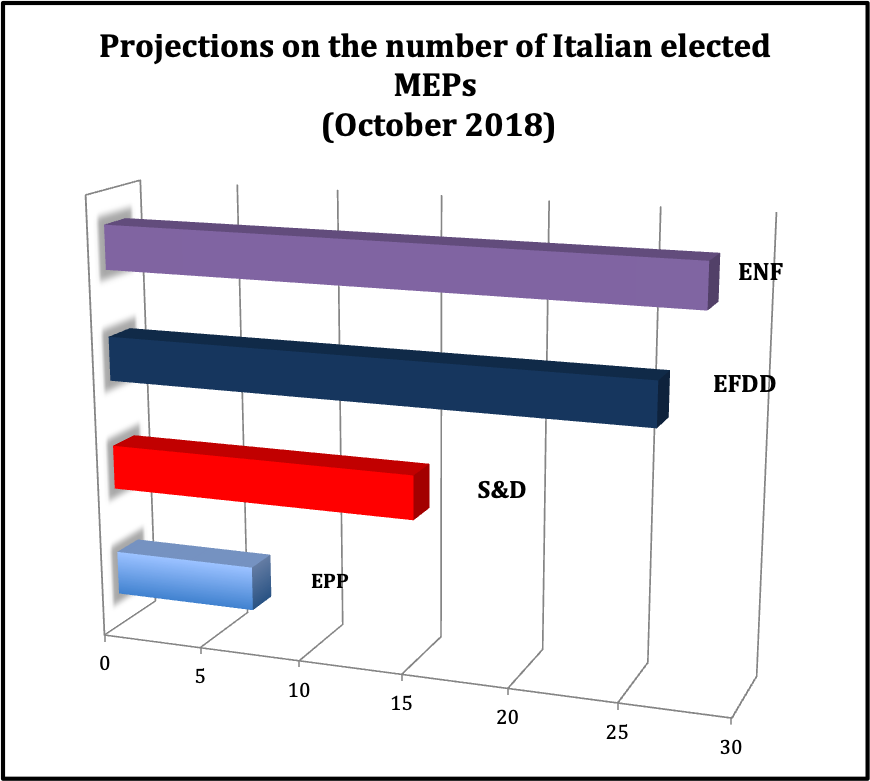 Another major outcome of this massive crisis in mainstream politics is the shifting towards a new policy-approach to migration.

Paradoxically, migration became a sensitive issue in Italy when the real crisis was almost over.

Also considered this, EU has to cope regularly with migration, especially on the political ground for what concerns the negotiations to overcome the actual contested regulation, the Dublin Treaty (2016/603).

Firstly, compared to the same three months of 2017 (July, August and September, which in 2018 are the first months of 5SM-League government), Italy saw a significant dwindle in numbers of landed migrants. (Table 4) 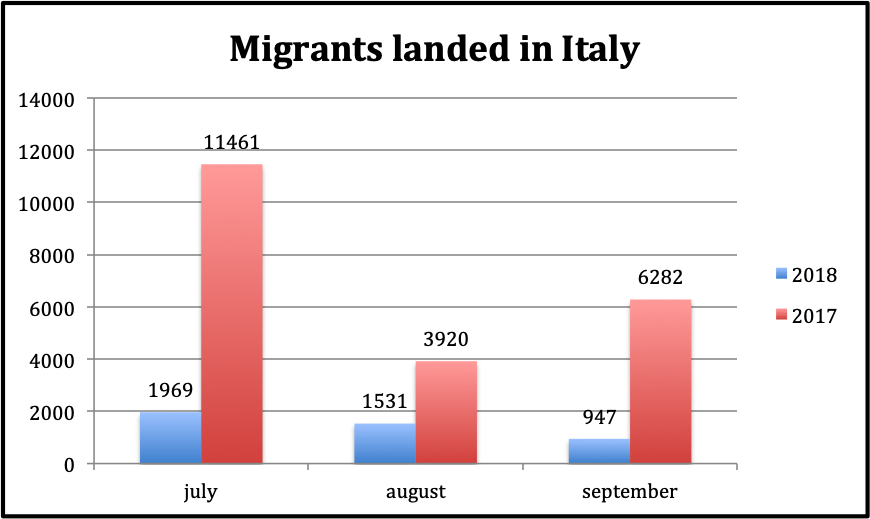 Nevertheless, through Interior Minister, the Italian government is implementing a new regulation, the Decree-Law 113/2018 (“Security and Immigration Decree”), introducing innovations into the legislative framework of migration management in Italy.

The core policy issue of the DL 113/2018 is restriction on the right to “humanitarian protection” (art. 5.6, Consolidated Text 286/98) to only few cases – notably for civil merits, to victims of exploitation, domestic abuses and for health issues.

This choice is particularly controverted in terms of harmonisation of the phenomenon at the European level: humanitarian protection is a Italy-exclusive (and EU-appreciated) tool, thanks to which Italian institutions can release temporary visas – for humanitarian purposes indeed – also when there are no legal conditions for conceding the refugee status or the international protection.

This government approach aims at restricting and channelling asylum requests.

DL 113/2018 introduced stricter rules regarding asylum requests themselves, by increasing typologies of crimes that implies suspension of the request for foreigners.

Definitely, in front of a minor number of migrants landed, the populist government adopted an even stricter regulation to address the issue, deepening the gap among Member States on the most sensitive affair in the EU.

Having assessed that the source for Italian mainstream political parties is surely domestic, the prevision for the impact of such a crisis on the spectre of European integration is possibly negative.

The difficulties of the most prominent pro-integration parties mean a general consensus peak and policy freedom for anti-EU actors like 5SM and the League: at the political level, on tricky issues like migration, or like fiscal discipline (the analysis of which goes beyond the scope of the paper); at the institutional level on the composition of the next European Parliament and on the governance of the EU.