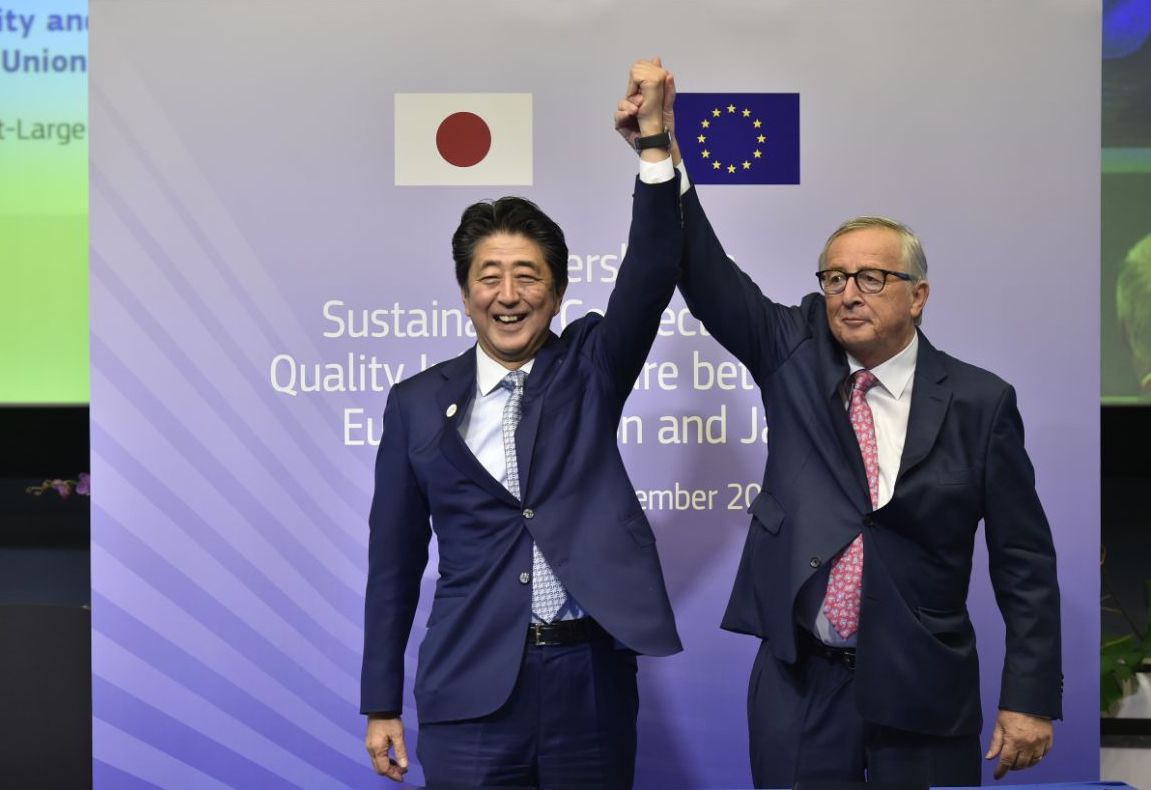 On September 27th, during a forum held in Brussels titled “EU-Asia Connectivity – Building Bridges for a Sustainable Future”, the European Union and Japan reached an important agreement on infrastructure building and development standards. Prime Minister of Japan Shinzo Abe and European Commission president Jean-Claude Juncker jointly signed the “Partnership on Sustainable Connectivity and Quality Infrastructure between the European Union and Japan”. Many EU and Japanese officials, as well as finance and industrial representatives, were present at the event.

This important agreement is the first fundamental piece of a much broader EU Strategy aiming to improve connections between Europe and Asia. Quoting the official introduction of the strategy presented by the Commission in September, “sustainable, comprehensive and rules-based connectivity will contribute to the enhanced prosperity, safety and resilience of people and societies in Europe and Asia”.

The Connecting Europe and Asia EU Strategy is a clear tentative to respond to the well-known Chinese Belt and Road Initiative. Even if many EU member states declared their favor to the Chinese unprecedented initiative, and 130 countries around the world already planned to spend about 575 billion US dollars in that framework, many concerns are quickly rising around the project. These concerns are mainly about the risk, for countries involved in Chinese funded projects, to find themselves permanently indebt and easily “controlled” by China’s ruthlessness willing to expand its economic and political influence. Even if China has never been directly cited in the materials of the EU Strategy or during the forum, Prime Minister Abe declared that we find ourselves at a time when “values and principles common to the EU and Japan could waver or rift”. Commission President Junker added: “The EU and Japan share the same commitment to democracy, rule of law, good governance practices, freedom, and human dignity”. Moreover, another common and justified critique to the Chinese BRI is about weak environmental and safety standards. Again, the contrast between the Chinese project and the European Union Strategy is evident: the EU Strategy has sustainability as a main priority for its development.

But what exactly is this innovative and ambitious EU Strategy about? As we said, the three keywords are sustainable, comprehensive and rules-based connectivity. This “connectivity” between the EU and Asia involves mainly 4 sectors: transport (trade and travel), energy, digital services and human dimension (education, research, innovation, culture, and tourism). The total budget envisioned by the EU for the project is around 60 billion euro, and it could even be increased by the upcoming new von del Leyen’s Commission.

Going back to the EU-Japan signed agreement, it is structured in 10 clear points formalizing the already envisaged strong participation of Japan to the Connectivity EU Strategy. The agreement calls for “transparent procurement practices, the ensuring of debt sustainability and the high standards of economic, fiscal, financial, social and environmental sustainability”, also stressing the high-quality features of any future EU-Japan joint project.

Consequently, this latest agreement reached between the EU and Japan continues to enhance the already deep and functioning relationship between these two fundamental global actors. In fact, with the EU-Japan Strategic Partnership Agreement (SPA) signed in Tokyo in July 2018 after 5 years of negotiations, and the EU-Japan Economic Partnership Agreement (EPA) entered into force in February 2019, Japan became with no doubt one of the principal partners of the EU.

Lately, the multilateral approach to global problems appeared to be in crises, and it has been repeatedly undermined with an increase in bilateral, and often dangerous solutions. Some examples are the decision of President Trump to withdraw from the Paris Agreement on climate change, from the Iran nuclear deal framework, and the currently ongoing trade war between the USA and China. What the EU and Japan did, is a clear signal to show that a smart, efficient and collaborative multilateral approach is still the best option to deal with the new challenges ahead.

Delegation of the European Union to Japan