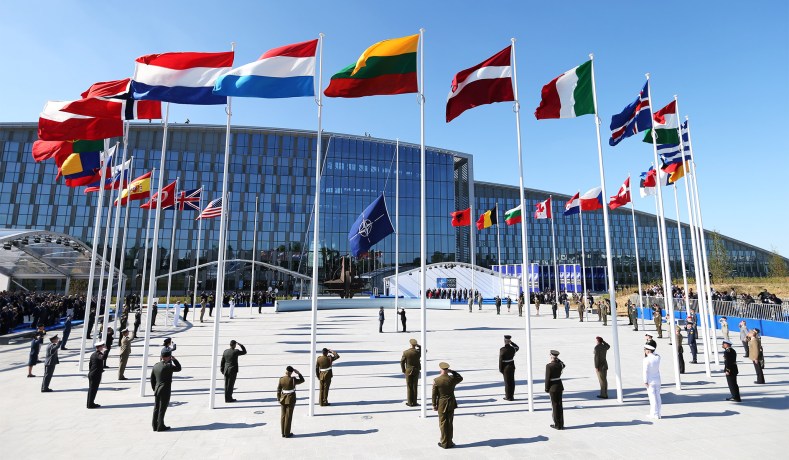 After the Second World War, Europe appeared as a devastated continent, which had to be rebuilt from the foundations, both material and political; marked by a bloody conflict that paralyzed entire nations, destroyed economies and left a vast open space for the two winning powers: the United States and the Soviet Union. Soon it became clear that the fears should not solely look at possible German rearmament, but also at a new challenge that was opening up for the Western world. The Cold War had begun without even leaving space for dialogue.

In this climate, a desire for cooperation arose in Western Europe countries in order to respond to two types of threats: first of all, the continuous decline of living standards in the Old Continent, and secondly the risk for survival in a possible new hostile international environment.

In this perspective, during the “Zurich Speech” of 1946, Churchill talked about the “United States of Europe” and suggested the possibility of creating a Council of Europe after the end of the war, intending to strengthen the European’s States position in the international context. Meanwhile, on the other side of the Atlantic Ocean, George Kennan – a Soviet specialist and minister-counselor at the U.S. embassy in Moscow – sent his famous “long telegram”, urging containment of Soviet expansion. Kennan’s analysis played a crucial role in the change of the U.S. administration’s position. Kennan, in fact, recommended firm support of forces in Europe in order to counter the attractions of Communism. Following his suggestions, in March 1947, the Truman Doctrine was announced, through which the U.S. administration indicated its intent to “support free peoples who are resisting attempted subjugation by armed minorities or by outside pressures”. This meant support for all nations allegedly threatened by Soviet Communism.

In an increasingly tense international scenario, the need to preserve and protect Europe had become evident even for the European nations themselves. In the aftermath of the Second World War, fears for a renewal of German aggressive power led, on March 4th 1947, to the signing of the Dunkirk Treaty by France and the United Kingdom. This climate of tension and fear became even worse on February 25th 1948, when the coup d’état in Prague was completed by the Soviet Union. For the United States and most European countries it became immediately clear that the structure of the newly formed United Nations organization would have been unable to be effective in the event of an armed attack by one of the members of the Security Council, due to the existence and the use of the veto power – and the inability to reach an agreement on disarmament. It is immediately clear why the American administration was inclined to a regional pact, which would have overcome simple military questions.

On March 17th, 1948, Britain, France, and Benelux countries signed the Brussels Treaty establishing Western Union. The Treaty was a fifty years based alliance in which there was a particular reference to Art. 51 UN Charter (self-defense) within Art. V of the Treaty: “if any of the High Contracting parties should be the object of an armed attack in Europe, the other High Contracting Parties, will, in accordance with the provisions of Article 51 of the Charter of the United Nations, afford the party so attacked all the military and other aid and assistance in their power”.

After the constitution of the Western Union, recalling Churchill’s idea of 1946 to associate the U.S. with the European Defense, the Canadian Secretary of States for External Affairs, St. Laurent, tried to carry out Churchill’s vision. For St. Laurent, the Brussels’ Organisation should have been replaced by an Atlantic defense system, which should have included the U.S. and Canada. Of course, the Canadian proposal was related to the fact that Canada could have potentially been attacked from the Polar Region and security of the state relied to a considerable extent on the U.S. The idea was welcomed by both Bevin and by the U.S., which started to lay down the roots of the Atlantic Organisation.

In October 1948, the Brussels Treaty Consultative Council announced that it had reached an agreement on the principles of an Atlantic Defence Agreement. At the same time, Norway, Denmark, and Sweden started to feel the communism’s pressure starting to discuss the possibility to conclude a Scandinavian Defence Alliance. This idea led to the possibility to affiliate the Scandinavian Alliance with the Atlantic group, but Sweden didn’t agree. At this point, the Soviet Union began to worry about the rise of the Atlantic alliance and warned the Scandinavian Alliance about its membership. Nevertheless, this attempt failed and Norway (February 1949) and Denmark (March 1949) decided to join the Atlantic alliance.

In this climate of international frictions generated by the beginning of the Cold War, on April 4th, 1949, Belgium, Canada, Denmark, France, Iceland, Italy, Luxembourg, The Netherlands, Norway, Portugal, The United Kingdom and The United States of America signed the North Atlantic Treaty, thereby establishing the North Atlantic Treaty Organisation (NATO), which incorporated the Western Union.

The North Atlantic Treaty represented a turning point for both sides of the Atlantic Ocean. For the United States, it marked the end of a tradition of non-long-term entanglement with the political and military affairs of the Old World. For the European allies, the Treaty was a significant step toward ensuring an American guarantee for their security in the face of internal and external Communist challenges. The economic revival of Europe after the devastation of the Second World War required the psychological comfort that the new transatlantic relationship seemed to be able to create, and without which the Marshall Plan would have failed in its efforts to rebuild and unify Europe.

In 1949, NATO was viewed as the first line of defense against the most probable source of danger to the free democracies of the Atlantic Area by its member states. In other words, it represented a deterrent to Communist aggression in Western Europe.

Originally, NATO was composed of 12 members (Belgium, Canada, Denmark, France, Iceland, Italy, Luxemburg, Netherlands, Norway, Portugal, the U.K., and the U.S.). It experienced its first expansion in 1952, with the admission of Greece and Turkey. In 1954, as a result of the London-Paris Agreements, a second expansion was approved with the entry of Western Germany.

The purpose of NATO remained unchanged: “to safeguard the freedom, common heritage and civilization of their peoples, founded on the principles of democracy, individual liberty and the rule of law”. Understandably, from its point of view, the Soviet Union viewed NATO not as a defensive machine, but as an aggressive instrument against the Communist States, in violation of the spirit of the U.N. Charter. However, American and European concerns were not groundless: the communists had already extended their influence to include Poland and most of the Balkans and continued to exert pressure on East Germany.

Canadian Secretary of State, Lester Pearson, who played a crucial role in drafting the NATO founding treaty, explained the reasons for NATO’s formation in his speech of 1949: “NATO was born out of fear of the aggressive and subversive policies of the communists against the Euro-Atlantic peace and security and the frustration created by the communist states’ obstruction of our efforts to make the United Nations function effectively as a universal security system […] This Treaty does not guarantee to peace itself. No treaty can do it. However, it gives us the promise of security and stability far greater than we have today. With our combined efforts, we must convert this promise into performance or the treaty will remain nothing else that is the umpteenth expression of high but not reached ideals.”

In Parallel with the development of the Atlantic Alliance, there was the creation of a new European institution, the Council of Europe. On October 26th, 1948, the Brussels Treaty Consultative Council announced its agreement on “the principle of a defensive pact for the North Atlantic and on the next steps to be taken in this direction” and set up a commission to study how to create a more comprehensive European Organisation. The Brussels treaty governments invited the other five states, Denmark, Italy, Ireland, Norway, and Sweden, to be involved in the work out the details of the future institution. On May 5th, 1949, the ten governments signed the statute of the Council of Europe, which was signed approximately one month after the North Atlantic Treaty. The ten signatories decide that the defense matters were to be outside the jurisdiction of the Council of Europe and reserved for NATO. This decision marked the interaction existing between Atlantic and European institutions which still today represent one of the pillars of the international chessboard.

The European Union and NATO share a core element: the membership. From these stem values, threats, and challenges, as well as competences. NATO defines the European Union as a unique and essential partner, even if when it comes to security and defense matters, the European Union relies – at least for now – primarily on intergovernmental cooperation between its 28 Member States. In this sense the role of the members is preponderant. Approximately two-thirds of them belong to both organizations.

This parallel path has permitted both to have developed special competences that allow them to protect the well-being of their citizens. NATO has a clear advantage in terms of military capabilities, especially in ensuring a credible deterrence and defense posture for the Alliance and its territory. On the other hand, the European Union has a clear advantage when it comes to civilian capabilities, which are wide-ranging and include, for instance, economic sanctions; building resilience in spheres such as energy and cybersecurity; addressing disinformation; humanitarian assistance; and transport infrastructure. Given the increasing security challenges European nations are going to face, there is a need to draw from a wide pool of different competencies, whether civilian, military or a combination of both. Something that a NATO-EU cooperation could ensure, even in such a different international scenario. 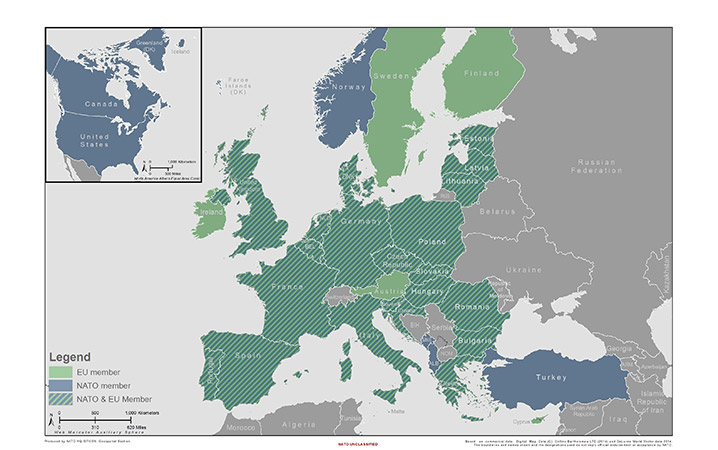