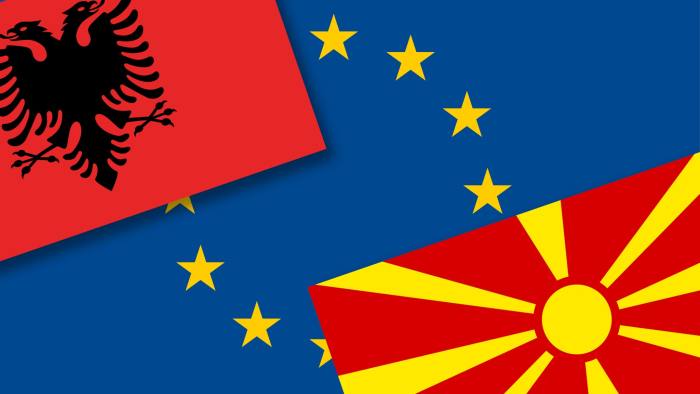 Much has been said about EU enlargement over the last few weeks, despite no progress could be seen on the issue. In fact, it was precisely the deadlock over the opening of accession negotiations with North Macedonia and Albania – more specifically, the French veto – that gave high visibility to the issue and increased its relevance. This article will describe the reasons behind the impasse and the next steps that the EU could take.

To begin with, how does EU enlargement work? According to art. 49 TEU, any European state[1] respecting the EU’s core values listed in art. 2 TEU can apply for membership. After an evaluation by the European Commission, the consent of the European Parliament and a unanimity vote in the Council, a country can obtain the candidate status. When deemed ready (i.e. when sufficient progress has already been achieved),[2] another unanimity vote in the Council is required to kick off the negotiation phase. In order to conduct these negotiations, EU legislation and standards (the so-called acquis) are divided into 35 chapters which are then negotiated one by one. When all EU governments are satisfied with the candidate’s progress in every policy field, an Accession Treaty is concluded; it must then be ratified by all EU member states, according to their constitutional requirements. In the Western Balkans, there are at present 4 candidate countries (Albania, the Republic of North Macedonia, Montenegro and Serbia) and 2 potential candidate countries (Bosnia and Herzegovina and Kosovo).

During the latest EU Summit,[3] on 17th and 18th October, the heads of state and government of EU member states failed to reach a decision on whether to open accession negotiations with Albania and North Macedonia. After such decision had already been delayed by the Council in 2018 and again in June 2019, the EU chiefs (namely, Commission President Jean-Claude Juncker, President-elect Ursula von der Leyen, the President of the European Council Donald Tusk and the President of the Parliament, David Sassoli) wrote a letter expressing their support for the negotiations. Nonetheless, in the General Affairs Council[4] on the 19th November the topic was only marginally addressed, and it is not on the draft agenda for the next European Council, on the 12-13th December, devoted to climate change and EU budget. As a matter of fact, the issue will have to be addressed again before May 2020, when an EU-Western Balkans meeting will be held in Zagreb, under the auspices of the Croatian Presidency.[5]

We have already seen that accession is a long and cumbersome process, in which member states can intervene at multiple stages. If both the European Parliament and the Commission have already recognized[6] that the countries have made sufficient progress for the negotiation process to be opened, why this stalemate in the Council now? Earlier in October, Albania, North Macedonia and Serbia had even decided to advance regional cooperation by forming a “mini-Schengen” (to become operational in 2021 and potentially enlarged in the future to other Western Balkan countries), establishing the free movement of people, goods, services and capital to further show their commitment to regional cooperation and good neighbourly relations, requisites for prospective EU membership.

However, this deadlock was somehow announced: the French President Emmanuel Macron had already been vocal before the summit, calling for a reform of the “bizarre” EU enlargement procedures, saying that a deeper integration among members is necessary before proposing an enlargement. When the issue was raised in the European Council, France, the Netherlands and Denmark remained the most suspicious countries, after Germany lifted its opposition. However, after the proposal of the Finnish Presidency to decouple paths for the two countries, Macron remained alone in clearly opposing the opening of accession negotiations, though acknowledging the progress of the candidates.[7]Instead, he urged a thorough internal reform of EU decision-making structures, albeit providing absolutely no detail on such proposed changes.

Why this tough stance? For some, it could be due to the fear that the radical right exploit the subject, therefore there could be margins for improvement after March local elections. Others suggest that it is a provocation to the German commitment to maintain the EU budget at 1% of EU GNI.[8] Or it could be another attempt to push forward internal reform of the EU, possibly removing qualified majority in fiscal and foreign policy, or even a critique to Central and Eastern European member states over rule of law and corruption (in fact, he had blamed these countries’ “social dumping” in the past). All in all, Macron is probably not alone in his belief that integration among existing member states should be deepened before new countries can be admitted – especially after Brexit.

The reactions to the Council’s non-decision, however, were quite strong both within and outside EU institutions. Tusk said that the candidates have done their task, while the EU has failed to deliver on its promises; Juncker talked of a “grave historic mistake”; the Commissioner for enlargement Johannes Hahn accused EU leaders of breaking their commitments, and several other leaders (from Angela Merkel to Andrej Babiš) as well as the High Representative Federica Mogherini expressed their disappointment. Even the US special envoy to the region, Matthew Palmer, declared that “America wants the Western Balkans to have a European perspective and will do everything in its power to persuade the EU to change its position”. In the meantime, the decision has cast uncertainty on the Western Balkan countries: the Macedonian Prime Minister Zoran Zaev called for snap elections (though declaring that all leaders will pursue EU integration), Albania criticized the EU for changing conditionality rules, and Serbian Prime Minister Aleksandar Vučić declared  that the EU’s attitude has left the region feeling it cannot rely on its western neighbours alone (hence legitimizing closer ties with non-democratic countries). Security in the area could deteriorate quite quickly, the European Council on Foreign Relations (ECFR) says, potentially affecting, for instance, the Belgrade-Pristina dialogue.

In fact, albeit the absorption capacity of the EU and the maintenance of momentum for integration are envisaged in the Copenhagen criteria themselves, the timing of such crucial considerations could impair the Union’s credibility. Failing to deliver its promises despite candidates’ compliance with conditionality could i weaken the prospects for accession and lead to an entrenchment of the status quo, or even a democratic backsliding. Indeed, the region is of great strategic importance not only to the EU, but also to foreign powers such as China, Russia or Turkey, already casting their economic, political and cultural influence.

Researchers acknowledge the real need of reforming enlargement policy, too easily halted at the EU level and whose standards too weakly respected in candidate countries – but blocking the whole process does not appear the most logic option to some observers. To overcome the present impasse, for instance, this contribution by ECFR suggests to replace the vertical model of enlargement process with a horizontal integration sector by sector, which would show results sooner, cooperatively enhance local institutional capacity, and allow for targeted (and increased) financial assistance. Other proposals include introducing qualified majority voting in the Council, to contrast the gatekeeping role of single member states, which hinders the credibility of conditionality. The so-called “enlargement fatigue” – also expressed by the lukewarm support for new accessions reflected in opinion polls – could be the subject of improved EU communication on the topic, to reach citizens in the EU and in the aspiring countries. Finally, the EU needs to improve the inclusion of civil society rather than exclusively dealing with government elites: this could help ensuring that reform is implemented beyond a merely formal compliance. After all, as argued here, the crisis opened by Macron could and should be exploited by the EU to find new ways of being involved in the region, without putting forward membership as a panacea. Nonetheless, the fading membership prospects could lead to delays in democratization, or even encourage democratic backsliding. Is the EU ready to take responsibility for that?

[1] Thus entailing a geographical (although flexible) requirement and ultimately resting on the definition of states under international law. The latter condition poses some problems for Kosovo’s admission, since 5 EU member states do not recognize its independence.

[2] In fact, in order to enter the EU, an aspiring country must comply with the so-called “Copenhagen criteria”, set forth in 1993 during the EU Council in Copenhagen. They include political and economic requirements (stable institutions guaranteeing democracy, the rule of law, human rights and protection of minorities; a functioning market economy) as well as the administrative and institutional capacity to effectively take on the obligations of membership. The Union’s “capacity to absorb new members, while maintaining the momentum of European integration” is also considered.

[4] The Council of the European Union is composed of the national ministers of each member state. It meets in 10 different configurations, depending on the subject discussed. Among them, the General Affairs Council, bringing together the Ministers for European Affairs, has a coordination role and lays the groundwork for European Council meetings.

[5] While the European Council elects its own President for 2 years and a half (currently Donald Tusk, to be replaced by Charles Michel on the 1st December), the Council of the European Union has a rotating presidency, therefore it is chaired by a different member states, every 6 months. After Finland, Croatia will take up the Presidency in January 2020.

[6] The Commission has recommended opening negotiations with North Macedonia (then Former Yugoslav Republic of Macedonia, FYROM) since 2009, and with Albania since 2014, as stated in this resolution of the European Parliament.

[7] He nonetheless declared that some areas, including immigration, still need improvement. Moreover, he claimed that he could hardly justify this enlargement in front of public opinion, due to the high number of Albanian citizens requesting asylum in France.

[8] In fact, Macron made a peculiar metaphor, comparing the EU to a “shared house” in which renovations are needed before being able to invite additional dwellers, but whose residents are reluctant to invest more than 1%.